Work of Mercy – with FoodClique!

No jokes, it is already the second week of Lent and as early as it is, it isn’t too early to review our Lenten plans. Are we still on track with our plans of abstinence? Have we quit yet or planning to? Are we modifying our plans because they seem too much now? Well, whatever it is, do not be discouraged but ask for the Holy Spirit’s strength and guidance today.

During these 40 days (actually 46 days from Ash Wednesday to Holy Saturday, including Sundays) of Lent, we are encouraged to pray, fast and give alms. Here, we’ll focus on fasting during Lent.

Fasting requires that only one full meal be taken per day. Two other smaller meals may be taken during the day to maintain physical strength, but these two meals together should not equal a full meal in quantity. Fasting is an obligation for all those who have reached the age of 18 and continues until age 59. Those not specifically obliged to fast are encouraged to join in the discipline of fasting to the extent that they are able. The fast is broken by eating between meals and by drinks which could be considered food (milk shakes, but not milk). Alcoholic beverages do not break the fast; however, they seem contrary to the spirit of doing penance. 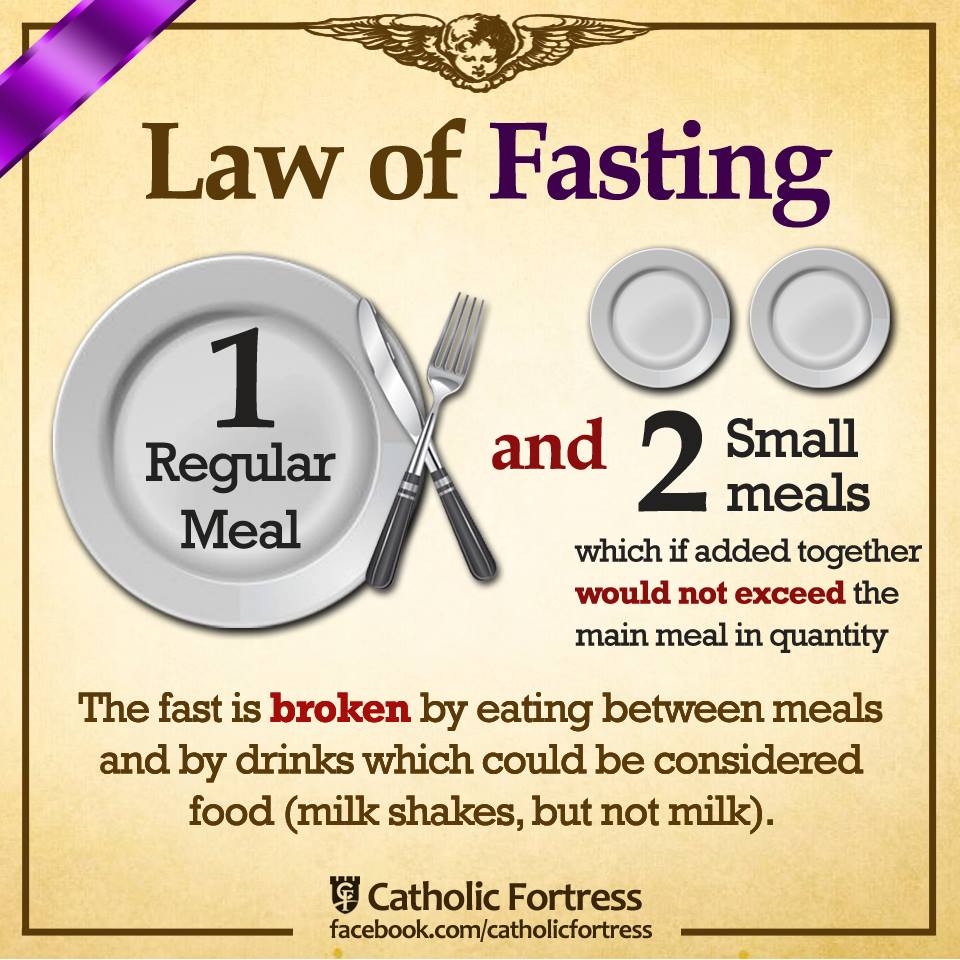 Abstinence prohibits individuals from eating meat on a particular day. Abstinence is an obligation for all those who have reached the age of 14 and continues throughout their entire life. The days of abstinence and fast during Lent are Ash Wednesday, Good Friday and all Fridays in Lent. On the Fridays of Lent, we remember the sacrifice of Christ on Good Friday and unite ourselves with that sacrifice through abstinence and prayer. 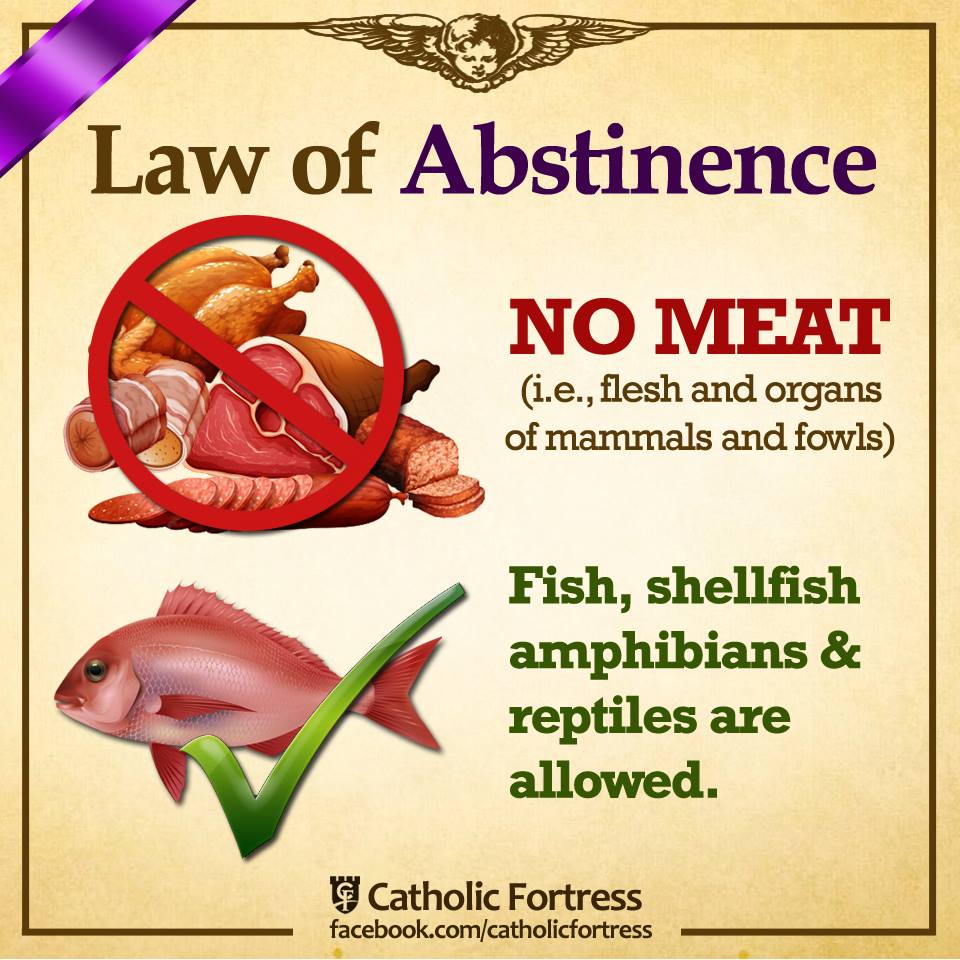 The question of what abstinence from meat really entails has a way of always popping up each Lent. Well, abstinence laws consider that meat comes only from animals such as chickens, cows, sheep or pigs; all of which live on land. Birds are also considered meat. Abstinence does not include meat juices and liquid foods made from meat.  Thus, such foods as chicken broth, soups cooked or flavoured with meat, as well as seasonings or condiments made from animal fat are technically not forbidden.

Fish are a different category of animal.  Salt and freshwater species of fish, amphibians, reptiles, (cold-blooded animals) and shellfish are permitted. While fish, lobster and other shellfish are not considered meat and can be consumed on days of abstinence, indulging in the lavish buffet at your favourite seafood place sort of misses the point.  Abstaining from meat and other indulgences during Lent is a penitential practice.

Besides those outside the age limits, those of unsound mind, the sick, the frail, pregnant or nursing women according to need for meat or nourishment, manual labourers according to need, guests at a meal who cannot excuse themselves without giving great offense or causing enmity and other situations of moral or physical impossibility to observe the penitential discipline can be excused from this penitential fast. However, they are encouraged to join in this discipline to the extent that they are able.

Aside from these minimum penitential requirements, Catholics are encouraged to impose some personal penance on themselves at other times. It could be modelled after abstinence and fasting. A person could, for example, multiply the number of days they abstain. Some people give up meat entirely for religious motives (as opposed to those who give it up for health or other motives). Similarly, one could multiply the number of days that one fasted. Such freely chosen fasting could also consist in giving up something one enjoys – candy, soft drinks, smoking, that cocktail before supper, and so on. This is left to the individual. Some traditional Lenten practices and suggestions:

This site uses Akismet to reduce spam. Learn how your comment data is processed.